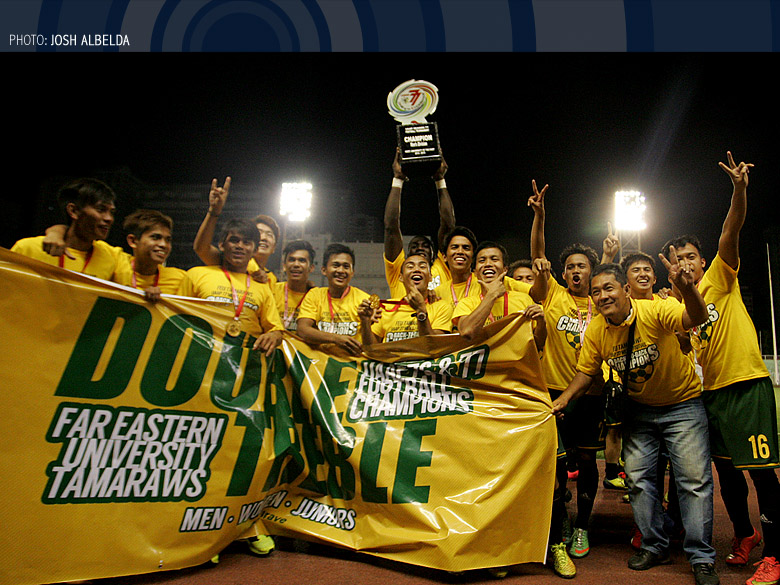 Recap:Far Eastern University remained alive for back-to-back titles after surviving the University of the Philippines, 1- 0, in extra added time in the UAAP 77 Men’s Semifinals last Sunday at the Rizal Memorial Football Field.

Recap:UE and Adamson battled to a 2-2 draw at the FEU-Diliman Field, Thursday afternoon.

UP, DLSU battle for solo lead in men's football

Preview:University of the Philippines and De La Salle will be gunning for solo lead this Thursday.

Alquiros, Uy lead DLSU past UP for solo first

Recap:De La Salle jumps to the top of the standings with a 3-0 win over University of the Philippines.

Recap:De La Salle and Ateneo battled to a draw once again in UAAP 77 Men's Football action.

Recap:Jinggoy Valmayor scored a hat trick to lead UP to a 3-1 win over defending champion FEU.

Recap:Ateneo de Manila and National University bounced back to end the first round with big wins.

Ateneo, National U look to bounce back from losses

Preview:Final Four contenders Ateneo and National University look to end the first round on a high note.

Recap:The University of the Philippines notched its third win with a 6-0 thrashing of Adamson University.

Recap:The Tamaraws rode on the hat-trick of Eric Giganto to post a convincing 7-4 victory over the Tigers and join early winners Ateneo and NU on top.

Recap:The FEU Lady Tamaraws defeated UST, 2-1 in Game 2 of the UAAP Season 76 Women's Football Finals to capture their second straight championship and 9th title overall, becoming the winningest team in the history of the league.

Melliza, FEU stops UP in Game 2 to rule Men’s Football

Recap:Jhan-jhan Melliza scored the championship clinching goal in Game 2 of the UAAP Season 76 Men's Football Finals to beat UP, 1-0.

FEU explodes in extra time to take Game 1 over UP

UP stomps on Ateneo, La Salle edges NU to close out elims

Recap:The Final Four pairings are set after UP prevailed over Ateneo and La Salle beat NU.

Recap:Ateneo's title reign in the UAAP Men's Football tournament ended as they fell, 1-0 to NU.

Recap:FEU secured a twice-to-beat advantage in the Final Four of the UAAP Season 76 Football tournament after defeating UST, 2-1.

Recap:FEU notched its sixth straight victory of the season to complete a sweep of the first round.

Recap:UST dealt UE its second straight loss with an inspiring come from behind victory.

Recap:FEU rose to the top of the team standings after defeating UE, 1-0.

Recap:With ace striker Jess Melliza on target anew, the rampaging Tamaraws outscored the Tigers in the crucial second half to third their straight victory.

UST beats UP to stay perfect in women's football

Recap:University of Santo Tomas blanked University of the Philippines, 2-0, to notch its second straight victory in as many assignments in women's football.

Recap:The DLSU Green Booters avoided a 0-3 start to the season by beating UP, 2-1 while UE took the top spot at the team standings after a 2-0 thrashing of NU.

Recap:UE, the lone winless squad last season, opened the UAAP Season 76 men's football tournament with a giant-sized upset of UP even as UST and FEU also prevailed.

Late goal pushes La Salle past UP in women's football

Recap:Last season's UAAP women's football runner-up De La Salle University got a late goal to escape with a win over University of the Philippines.

Preview:UAAP 76 men's football kicks off on Saturday at the FEU - DIliman football field.

Recap:Ateneo ended a five-year Finals drought by edging La Salle in a penalty shootout during their Final Four encounter.

La Salle gets share of top spot with win over Ateneo

Recap:League-leading Ateneo de Manila University was held to a scoreless draw by University of Santo Tomas.

Recap:FEU is now at the top of the team standing after their win over UE. 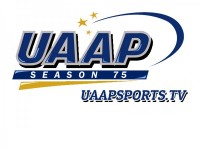 Recap:Aina Martin capitalized on a free kick opportunity to life Ateneo past UP at the start of the second round of eliminations.

Recap:Far Eastern University exploded for five goals, highlighted by a hat trick from Jesus Joaquin Melizza, in a 5-2 win over the Univeristy of the East.

Recap:After four game days in Season 75, Ateneo has risen to the top of the team standings in Men's football.

Recap:Defending champion UST finally registered a win while Ateneo's Anne Martin tallied her third goal of the season versus DLSU.

Melliza stars anew in FEU demolition of UP

Recap:FEU scored a surprising 3-0 win over defending champion UP in men's football.

Recap:UST title-defense got off to a horrific start as FEU ran all over them en route to a 3-0 win while DLSU and UP battled to a scoreless draw.

Recap:UP got off its title defense to a good start, nipping UE in its debut match.

Recap:NU received a rude welcome to the UAAP with 1-2 loss to UST.